Dick Proenneke: Alone in the Wilderness 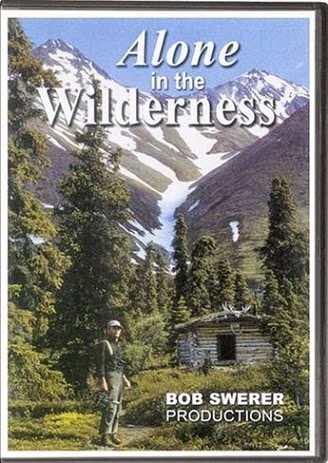 "Alone in the Wilderness" is the story of Dick Proenneke living in Alaska at Twin Lakes. This film shows a man living on pristine land that is unchanged by man, while being alone in a type of wilderness that few people would dare to challenge. Dick selected this type of peaceful setting even though it had brutally cold winters in which provided the serenity of stillness, at times. This DVD is so enjoyable to watch and it has a calming effect to it, if you enjoy this type of stuff. Just to see a person living off the land (for the most part - outside of the occasional delivery of certain products like granulated sugar, etc.) and having to put in all the hard work like cutting all of their wood, building their own cabin, making their own utensils while catching their fish, killing certain wild animals and growing their own food, all while documenting and narrating the chain of events during the process, is truly aesthetically pleasing to watch. For one to achieve such things, not only did a person need to be an excellent craftsman (and a great carpenter he was), but they had to also be very content with one's own thoughts and company...

This was a dream come true and a lifetime challenge for Dick Proenneke, that he ultimately lived out. What was going to be a 1 to 1.5 year project, turned into 30 years of outdoor peacefulness and pleasant, self-fulfilling adventures. He didn't leave the wilderness of Twin Lakes until he was 82 years old! He mentioned that the -40 (Fahrenheit) and -50 degree winters were starting to get hard on his joints. After returning to civilization at age 82, he died 4 years later from a stroke, at age 86.

Although this movie will not be for everyone, since not everybody seems to enjoy nature nowadays, if you are looking for some soothing outdoor explorations in a beautiful Alaskan setting, you'll love this flick! Alone in the Wilderness is the only film that featured Dick Proenneke that I have watched, but they also made a couple more (not including the Part 2, to this one) that was related to this one: "Alaska, Silence and Solitude" and "The Frozen North." The DVD for this show seems to be priced fairly high at the moment, so you may want to watch a short clip on YouTube (it skips around through various parts and leaves out most of the film), to get a better sense of what type of flick this is and/or to see whether or not this style of documentary is for you: www.youtube.com/watch?v=iYJKd0rkKss

---End of Post "Dick Proenneke: Alone in the Wilderness"
Posted by Obscurely Diverse at 6:24 PM

Obscurely Diverse
A creative thinker that is never bored. There are endless amounts of things I'd like to be doing at the moment and there is never enough time for all of them......