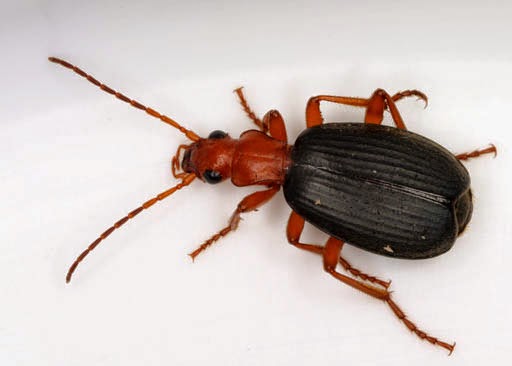 I recently mentioned a beetle that could basically blow fire out of its bunghole, on another community website a while back. Since some folks may have thought that I was simply nuts or insane, I thought it would be a good idea to clarify on my Wildlife & Nature Blog; ha!

Bombardier beetles are ground-based beetles that come equipped with a bizarre defense mechanism that, when bothered or pissed off, allows them to eject an extremely hot, vapor-like chemical spray out from the tip of their abdomen. Oh, it makes a popping sound, too. LOL!

This spray is due to a chemical reaction between hydrogen peroxide and hydroquinone, which is stored in separate areas of the abdomen. This creative beetle has a 3rd chamber that mixes this stuff with catalytic enzymes and water. This crazed reaction not only produces the gas that fuels the ejection, but it also heats up to nearly the boiling point of water during the process. Any poor insect or tiny critters that get near this beetle's butt, is just asking for death!

If you'd like a more elaborate explanation, go here: en.wikipedia.org/wiki/Bombardier_beetle

Some people also use this beetle to defend the myths & legends of ancient fire-breathing dragons, too. Of course, this bug also makes for great debates when concerning certain aspects of the theory of evolution. If you'd rather read more about that, you can start here: https://answersingenesis.org/evidence-for-creation/design-in-nature/pygidial-gland-of-the-bombardier-beetle-brachinus-sp/

Anyway, I just thought I'd share this tidbit with the community today; cheers!

Image Credit: Is already provided in the Wiki link above.

---End of Post "The Bizarre Bombardier Beetle"
Posted by Obscurely Diverse at 11:45 PM

Obscurely Diverse
A creative thinker that is never bored. There are endless amounts of things I'd like to be doing at the moment and there is never enough time for all of them......